Harriman in the salt mines, one of Berchtesgaden's big three attractions

School kids eager to ride the railway deep into the mines

Buses in front of the train station head to Salzburg, Obersalzberg, Königssee and all other points in beautiful Berchtesganer Land

Free tasting at one of Germany's oldest distilleries

Arguably Germany's most scenic church, dating from 1512, in the village of Ramsau

Sometimes it's the simple things in life: Bavarian bratwurst doused in a special broth over sauerkraut and potato dumplings. Mmm

The idyllic waters of Lake Konigssee as seen from Painter's Corner

Young and in love on Königssee

Harriman will lead you to all the featured sites and stunning scenery, including friendly faces

After the founding of Salzburg in 696 A.D. came the first mention of many settlements in the area, including the forest in front of the snow-peaked Watzmann (Germany’s second-highest mountain at 2,712 m/8,900 ft). 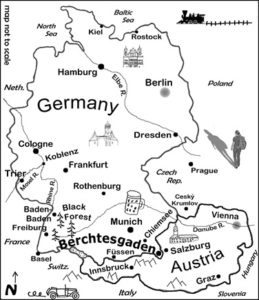 In the 11th century, Lord Perther arrived and built a hunting cabin that became known as Perther’s Gaden. From this moniker evolved the name Berchtesgaden.

In 1102, Augustinian monks settled here and began building a monastery with an adjoining church; look for the twin spires rising above town. The holy men were determined to achieve this symbolic feat as they had first proclaimed Perther’s Gaden “…a terrifying forest constantly covered with ice and snow… a vast solitude inhabited by wild beasts and dragons,” according to David Harper, co-founder of Eagle’s Nest Historical Tours.

Frederick I (Barbarossa), Holy Roman Emperor and king of Germany from 1152-90, was delighted to hear of this fruitful monastery that neighbored the ever-annoying archbishops of Salzburg who boasted abundant deposits of salt. Barbarossa was quick to grant the monks extra rights to hunt, fish, forest, cultivate, and develop mines to excavate the “white gold” on their side of the border. Salt was the key resource in these parts that assured Berchtesgaden unusual power for such a small enclave, securing a political voice in the Reichstag (or parliament) and ultimately the right to become an independent principality ruled by prince-provosts. Even today salt remains king, accounting for a wealth of wellness centers and the official title of Kurgebiet, or health-resort region.

In 1803, Napoleon dashed in with his battle-hardened Grand Armée and seized Berchtesgaden in one swoop. The monastery was consequently disbanded and church administration secularized. In the years to follow, Berchtesgaden was tossed around like a political football. First it was annexed to Salzburg under Habsburg rule before finally being restored to Bavaria in 1810. This attracted the Bavarian royal family who in 1818 refashioned the former monastery to a palace in which to relish the majesty of summer vacation in the lower Alps. (Perhaps Ludwig II garnered his fantastic inspirations in this idyllic corner of the kingdom while hiking alpine trails as a boy?)

The 20th century produced two world wars. The first was fought in the distant trenches of France and Belgium, but the second came knocking at Perther’s front door. Adolf Hitler became chancellor of Germany in 1933 and decided to figuratively pitch his tent in the Gaden, calling it home. Hitler began the Second World War that Germany grossly lost. Thankfully, the Allied band of brothers safeguarded the hallowed Augustinian seat, securing its prosperity for centuries to come and your timely visit.

This guide is an absolute must-have for independent travelers and military buffs interested in this picturesque corner of Bavaria that was once Nazi southern command and the seat of an empire. Moreover, author Brett Harriman has meticulously composed the information within this guide to educate you with local knowledge and history so you can make informed decisions that save time, as well as money, while leading to new adventures and acquaintances along the way. 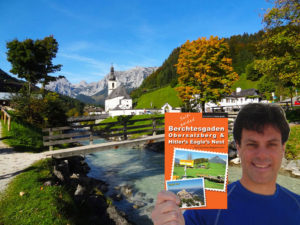 The big three blockbuster attractions in Berchtesgaden are the salt mines, Eagle’s Nest at Obersalzberg, and Königssee lake in the national park. If you start first thing in the morning (May-Oct), you can… (the remainder of this section you can find in our guidebook for sale above).

In addition to the abovementioned itinerary and attractions, consider a revitalizing visit to the Watzmann Therme for a vacation from your vacation (indulge in a swim, soak, Jacuzzi, full-body massage). With extra time, join the guided mountain hiking program offered free by the Nationalpark Berchtesgaden association or on your own trek the untamed and unforgettable Almbach Gorge. Swing by the Grassl Enzianbrennerei for free samples of liqueur and schnapps. If you’re visiting in winter, experience the bobsled thrill of a lifetime or the forbidding custom that is Krampus.