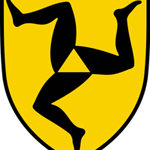 Situated 5 km (3 mi) from the royal castles of Neuschwanstein and Hohenschwangau, Füssen is the southern end of Germany’s Romantic Road and the last Bavarian community before crossing the Austrian border. Commanding Füssen’s skyline is Hohes Schloss, a landmark fortress securing the frontier since the Middle Ages. In its shadow is Füssen’s quaint Old Town, accented by crooked lanes sweeping past medieval architecture, Hollywood’s chosen backdrop for the escape scenes in the 1963 movie classic “The Great Escape” starring Steve McQueen.

Although Füssen recently celebrated its 700th birthday, the town really dates from Roman times when Emperor Claudius forged the north-south trade route, Via Claudia Augusta, and garrisoned his troops here. Funnily, the name Füssen translates to “feet”; perhaps suggestive of the emperor’s legions of boots on the ground. 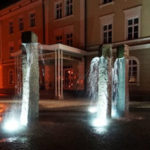 (www.fuessen.de, Kaiser Maximilian Platz 1, tel. 08362/93850, Mon-Fri 9:00-17:00 [April-Oct till 18:00], Sat 9:30-13:30 and Sunday in summer 9:30-12:30) is centrally located a few-minute walk from the train station. Out front of the TI is a cluster of stone columns capped by rotating blocks that compose a mesmerizing arrangement of fountains, which at night are even more entrancing when illuminated. TI has brochures in English, free town map, Internet computer (1€/15 min or free use for overnighting guests), and convivial staff often clad in traditional costume. Note: If you arrive after hours use the 24hr self-service info kiosk out front to find a room or snag a brochure. 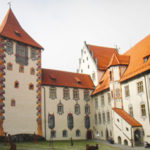 Besides a picturesque Old Town and cobbled pedestrian zone, Füssen features a glorious monastery, a massive fortress, and a waterfall called Lechfall set in a scenic gorge (pictured). At the southern end of the main shopping street (Reichenstrasse) is the beautiful parish church St. Mang, which is attached to the former Benedictine Monastery St. Mang that originally dates from the 8th century but renovations 1,000 years later reflect its Baroque character. Within this holy complex is the heritage museum “Museum der Stadt Füssen” (adult 6€, student 4€, April-Oct Tue-Sun 11:00-17:00, Nov-March Fri-Sun 13:00-16:00) exhibiting the history of Füssen, including its rare collection of lutes and violins as well as Bavaria’s oldest Dance of Death painting cycle (Totentanz, circa 1602; the museum can be found in the Rathaus courtyard around the corner from the parish church). Towering above St. Mang is Hohes Schloss, a 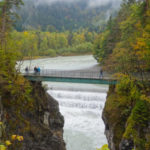 14th-century powerhouse fortress and former summer residence of the prince bishops of Augsburg. To reach its fascinating yet faux three-dimensional inner courtyard (pictured; painted in a way that deceptively leads visitors into believing that the oriels, window frames and corner embossing are genuine), climb the path running alongside the parish church St. Mang. The bishop’s former living quarters now accommodate a painting gallery displaying late-Gothic and Renaissance works from regional artists. Scale the corner tower “Fallturm” for wowing views (free typically April-Sept 11:00-16:00). Fifteen minutes by foot southwest of the castle is the deep and narrow Lechfall gorge (that I call the “washing machine”); Drivers heading to (Reutte/Tirol) Austria will pass Lechfall en route (with few parking spaces available).

End of the Romantic Road: 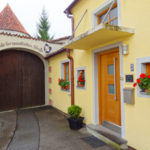 You may know that Füssen marks the southern end of Germany’s Romantic Road, but did you know that there really is an end point? Follow me and I’ll walk you past the Franciscan monastery to the landmark archway (pictured). — From the TI in the Old Town (it’s a 10-min trek), take the main shopping street (Reichenstrasse) to the end, go left, and follow the street (Lechhalde) down toward the river (passing the Kelari Greek tavern on the right, listed under Good Eats in

Harriman’s guide). Don’t cross over the bridge, instead step just to the right of it and continue to the riverbank. Cross underneath the bridge and continue straight on the cobbled riverside path (away from fortress). When the cobbled path turns to asphalt, go left then right and climb the stairway (54 steps) to the end of the Romantic Road (on right). — The heraldic shields you see flanking the archway represent the two communities at the southern and northern ends of the Romantic Road (Füssen, “Feet,” on the left and the two-tone flag of Würzburg on the right) 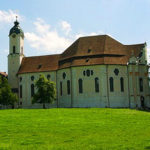 Some 45 km (27 mi) south of Landsberg, and 22 km (13 mi) north of Hohenschwangau, you’ll discover the Wieskirche, a gloriously scenic “Church in the Meadow.” In 1740, a chapel was built to pay homage to a wooden likeness of Jesus allegedly seen weeping. The Christ-like figure, located at the high altar and known as the Scourged Savior, became an object of worship for pilgrims Europe-wide. To handle the influx, a significant church was built in the meadow by the artistic brothers Dominikus and Johann Zimmermann. Dating from 1754, the Wieskirche just celebrated its  260-year anniversary. And there is much to celebrate; the church’s heavenly interior accented by a confection of swirling ornamentation is arguably Germany’s most dazzling example of Rococo-style, earning a place (since 1983) alongside the Taj Mahal and the Acropolis as an esteemed member of UNESCO’s World Heritage List. That said, the interior of St. Peter’s Church in Salzburg, in my opinion, is equally as stunning. Toilets (WC, .50ȼ) are located at the first souvenir kiosk in the parking area.

(This guide will be updated and placed within our new Self-guided Munich, Ludwig’s Castles & Hitler’s Eagle’s Nest guidebook that is in the works.)