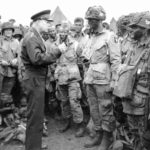 “Soldiers, Sailors, and Airmen of the Allied Expeditionary Force. You are about to embark upon the Great Crusade, toward which we have striven these many months. The eyes of the world are upon you.”

This year marks the 79th anniversary of the D-Day landings

On this epic tour Brett will guide you through Operation Overlord, the largest amphibious offensive in history, from storming beaches to airborne assaults, a violent clash of armies in Normandy, France, known to all as “D-Day.” A history lesson you will never forget!

This is more than a tour, it is a pilgrimage. Brett believes all travelers should one day come to Normandy, France and visit the battlefields where every-day heroes paid the ultimate price. It is a stark reminder that freedom is not free. A monumental debt is owed here; though difficult to repay, we can honor these selfless soldiers and validate their eternal sacrifice with our visit.

Piggybacking: This package has been designed so you can either sign up for it exclusively or piggyback it with one of Brett’s other tour programs to extend the cultural experience and enlightenment. But, be quick, the tour will sell out as there are only a handful of seats available. (Piggyback this package with another and deduct 20% from the advance payment of that tour, deduct 30% from the advance payment of a third package and 40% for a fourth package.)

Maximum capacity for this one-time tour is 8 persons — 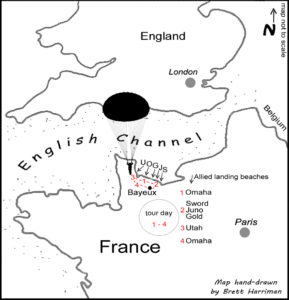 In case of bad weather we will revise the following itinerary as much as possible to visit indoor attractions on rainy days and save the outdoor sites for better weather.


Brett Harriman, your guide, will meet you in Bayeux, Normandy and escort you to our hotel for check-in and group orientation. We hit the ground running and start visiting the major sites, beginning with *Omaha Beach and Normandy American Cemetery (see cemetery No. 10) followed by the gun emplacements at **Pointe du Hoc.

*Early Tuesday morning, June 6, 1944, German soldiers peered out from their coastal defenses at sunrise to a truly awesome sight: an armada of warships – cruisers, destroyers, escorts, troop transports, gun boats, minesweepers, assault and landing craft – some 7,000 in all, delivering 150,000 men, that filled the horizon across the English Channel as far as the eye could see. A literal curtain of steel. Sea sick and frightened, the Allied men were brought ashore by specially designed landing craft known as Higgins boats, each transporting 36 soldiers. The landing craft lowered their iron ramps onto Omaha Beach at 6:30 a.m. and the first wave of troops rushed into a killing zone. GIs had to dash across some 200 yards of exposed beach under merciless enemy fire while sidestepping mines, steel obstacles, tank traps, barbed wire, and ultimately concrete bunkers and entrenched positions containing scores of German soldiers armed with machine guns, grenades, and anti-tank (PAK) cannons on the very bluff where Normandy American Cemetery now stands. Within the first two hours of combat, 2,400 Americans were dead — thus began the longest day on bloody Omaha Beach!


After breakfast we bounce to the eastern flank of the Allied invasion zone and visit the Pegasus Bridge and Memorial, scene of the first battle of D-Day, named after the British gliderborne units that secured it. From Pegasus we wend our way west along the coast passing Sword and Juno beaches to Gold Beach, the British sector, home of the “Mulberry” harbor, or artificial port, in time for a unique viewing experience at the 360° Circular Cinema having 9 HD screens featuring the 19-minute film “Normandy’s 100 Days of Battle.” Our encompassing journey advances farther west along the scenic Norman coastline to more captivating sites and sounds pertaining to Operation Overlord. We crown our memorable day with a tour of a historic farm and partake in sampling local intoxicants such as hard cider and Calvados, an apple brandy native to this glorious region of France.


Another day of epic highlights on our extensive tour itinerary begins after breakfast when we motor to the western flank of the Allied invasion zone and visit Utah Beach, followed by the quaint town of Ste. Mère-Église and its famed church with hanging paratrooper (Private John Steele played by Red Buttons in the movie classic “The Longest Day”). But that’s not all, our D-Day odyssey of wonderment and historic discovery is just beginning, we will explore 101st & 82nd Airborne battle sites such as Brécourt Manor (as seen in the television miniseries “Band of Bothers,” episode 2 “Day of Days”), La Fière Bridge, and Dead Man’s Corner. From the battlefields we move on to hallowed burial grounds to pay our respects to the young warriors who tragically lost their lives in the struggle and forever rest on foreign soil. First up is La Cambe Cemetery, Germany’s largest in the region, burial place to more than 21,000 dead. Our finale to Day 3 will see us at Bayeux War Cemetery, the largest Commonwealth cemetery of the Second World War in France, where 4,144 of its brave sons rest peacefully.


This a.m. we visit a few last sites we may have missed due to inclement weather or otherwise. Around noon, regrettably, it’s time to say Au revoir to the friends we’ve made. Our tour is over, unless you’ve chosen to continue with Brett on the next tour program to extend the cultural experience and enlightenment. (Brett will shuttle guests who require a transfer along the French coast to Bruges, Belgium, location of our next tour start for the Belgium Beer & Battlefields package.)

4 thoughts on “D-Day Beaches & Beyond”