Frankfurt to Munich via Ludwig’s Castles & The Sound of Music

2 – 4 spots remain for this package

Max capacity for this one-time tour is 7 persons —

Recommended viewing for this tour: “The Sound of Music” (must-see) — “Band of Brothers” (the entire 10-part series is captivating but specifically episode 10, “Points,” portrays the boys of Easy Company in Berchtesgaden and Austria) — “The Great Escape” (filmed in and around Füssen, including a wowing shot of Neuschwanstein castle during the airplane scene with James Garner and Donald Pleasence near the end of the movie). 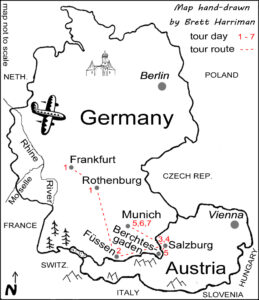 Brett Harriman, your guide, will meet you in Frankfurt for group orientation, followed by a walking tour from the city’s historical core to its skyscraping financial district. By the time you turn in for the evening, you will have a better understanding of why Frankfurt is ranked the 7th most livable city in the world.

As far as German fortress towns go, Rothenburg is the proverbial jewel in the crown. If one could realistically walk through a postcard, Rothenburg is the place. Here you’ll discover the Middle Ages magically preserved in the midst of a modern world. While Brett can’t promise you villagers queuing to pay their tithes, costumed acrobats performing gymnastic feats for titled heads, or blacksmiths hammering iron by charcoal-fired forges, he can assure you will cherish this medieval gem shaped like a pork chop. Overnight: Rothenburg.

Today is another busy day filled with adventure and historic discovery. After breakfast, we motor south along Germany’s most popular themed tourist route, the Romantic Road, from the medieval walled towns of middle Bavaria, where time appears to have stood still for centuries, to the green foothills of the snow-peaked Alps bordering Austria, where hikers mingle with edelweiss and the melodic voices of yodelers shepherd cows to the dairy. En route we’ll pass Augsburg, one of Germany’s oldest cities, named after its founding father, Roman Emperor Augustus, in 15 B.C. We’ll meander past historic Landsberg am Lech and its high-security prison, which made national headlines in the early 20th century when Adolf Hitler was imprisoned here after his botched attempt to overthrow the Bavarian government in the so-called Beer Hall Putsch. (From Nov. 1923 to Dec. ’24, Hitler lived in cell No. 7, where he spelled out his future plans in his book “Mein Kampf,” or My Struggle, which no politician in a democratic country bothered to read, until it was too late.) Farther south we visit the Wieskirche, or Church in the Meadow, arguably Germany’s most dazzling example of Rococo-style, earning a place (since 1983) alongside the Taj Mahal and the Acropolis as an esteemed member of UNESCO’s World Heritage List. Our final destination lands us in the border town of Füssen, the southern-most point on the Romantic Road, where we check in to our digs then tour Schloss Neuschwanstein: the epitome of castles everywhere, a Ludwig fantasy made real that resurrected the storybook style typically associated with chivalry and noble knights, now one of Germany’s most visited tourist attractions and our regal end to Day 3.

From Füssen we swing into Austria along a stunning alpine route—one that King Ludwig II often took in his carriage—through an evergreen forest, past an enchanting lake (Plansee) reflecting the most brilliant emerald-green waters before crossing back into Bavaria and on to petite Schloss Linderhof. After our castle tour, we continue our scenic spin through the charming Bavarian countryside en route to the City of Mozart and our heavenly home for the next two nights. 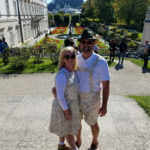 Time to throw on your specially tailored ‘play clothes’ because today we tour Salzburg and visit the sights made famous by the movie classic, “The Sound of Music,” including an excursion into Austria’s majestic lake district (locally Salzkammergut) to dip our toes in the region’s warmest lake, Mondsee. Translating to Moon Lake, Mondsee has to be romantic! It’s no wonder Hollywood married Georg and Maria von Trapp right here in the town’s Baroque church of St. Michael’s. What’s more, Mondsee is a pleasing place to indulge in a slice of scrumptious strudel, our finale to Day 5.


For history buffs and nature lovers, today will be another epic highlight on our extensive tour itinerary. After breakfast, we fire up the engine, bid Austria adieu, and roll across the German border to Berchtesgaden, where authentic Bavaria will be on full display in this picturesque village nestling at the toes of the Alps. Imagine pine forests, quaint farmhouses, onion-domed churches, and mountain rivulets cutting through lush meadows home to lethargic cows playing tunes with the bells hanging from their necks. Picture men clad in lederhosen, women wearing busty dirndls, girls sporting pigtails, and hikers clutching ornamented sticks seemingly within arm’s reach of jagged peaks belonging to majestic mountains. It’s authentic Bavaria; it’s Berchtesgadenerland, the real deal, and Brett can’t wait to introduce you to the sights. Among the many attractions on the list, we will visit Germany’s only national park in the Alps; we will descend deep within a World War II bunker beneath Hitler’s former home; and to conclude our alpine odyssey we’ll hop aboard a bus that will climb a steep four-mile stretch of serpentine road to an elevation of 5,500 feet, more than a mile in the sky, then we step through a 400-foot tunnel blasted into the mountain face, where Hitler’s former elevator will lift us another 400 feet within 45 seconds directly into the heart of the Eagle’s Nest soaring high above Berchtesgaden boasting sensational vistas of Bavaria and beyond.


From Berchtesgadenerland, we head north to Germany’s third largest city and our delightful digs for the next two nights. Often referred to as “the village of 1 million,” Munich is the proud capital of the German state of Bavaria. But perhaps more important, Munich is the beer capital of the world, thanks to the city’s namesake monks. No wonder Munich was voted “the city most Germans would prefer to live in.” And that’s not all, the popular consensus is not confined to Germany, according to the Mercer 2019 Quality of Living survey, Munich is ranked the 3rd most livable city in the world! Thus, there is no time to waste, Brett will guide you on an orientation tour of Munich Old Town followed by an immersion into Bavarian culture and feasting, a quality best ascribed to the monks. Amen!

Today is your day. We suggest palaces and playtime. To get you started, Brett will pay your entrance into Munich’s royal residence as well as point you to other notable sites to consider, such as Dachau concentration camp memorial; BMW museum and factory tour; and the world’s most famous beer hall, the Hofbräuhaus, a historical monument to over 400 years of brewing tradition, your chance to learn traditional Bavarian drinking songs such as “Oans, zwoa, G’suffa!” (One, two, chug-a-lug!), “Sweet Home Alabama,” and to perform the chicken dance in front of a live audience. Cheers!

Regrettably, it’s time to say Auf Wiederseh’n to the friends we’ve made. Our tour is over, unless you’ve chosen to stay on and experience the best of Oktoberfest with Brett in Munich!