Glasgow to Edinburgh via Glengoyne, Glenfiddich & the Game of Thrones

Max capacity for this tour is 7 persons —

Recommended viewing for this tour: “Braveheart” (must-see) — “Outlaw King” (the word Stirling you oft see and hear in the beginning of this film refers to the castle we visit on Day 3 of the itinerary; the second castle sacked and set ablaze is Doune at roughly 1 hour and 20 minutes into the movie) — “Monty Python and the Holy Grail” (corny British comedy mostly set in and around Doune castle that we visit on Day 3 of the itinerary) — “Quest’s World of Wonder” in Edinburgh (excellent 6-minute piece by Richard Quest beginning on board Queen Elizabeth’s Royal Yacht Britannia). 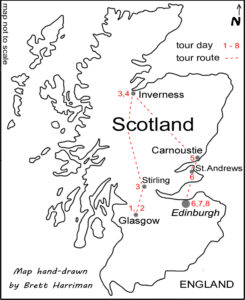 Brett Harriman, your guide, will meet you in central Glasgow at the hotel for group orientation.

After introductions, the action starts! First up, you tour one of Scotland’s beloved whisky distilleries followed by a second spirituous tour of another Glaswegian institution, Tennent’s brewery. By the time you complete the rounds, you will be proficient in the process of fermentation in the Scottish Lowlands.

After breakfast, work off the haggis touring the highlights of Glasgow. Later, from downtown, you’ll escape the urban hustle to the famed Highlands for lunch at a quaint Scottish tavern then join an unrivaled master class at Glengoyne distillery. What’s more, Brett knows your thirst for culture and cuisine is insatiable. Once your dram is drained he will escort you back to Glasgow and its favorite pub (voted Scotland’s best in 2016) for dinner and drinks, an intoxicating conclusion to your stay in Britain’s most settled city in the north.

Today will be another remarkable day filled with adventure and historic discovery. After breakfast, we motor north to Stirling castle, one of Scotland’s largest and most significant fortifications, traveling back to a time during the Middle Ages when William Wallace and Robert the Bruce savagely fought the English for Scottish independence. Not to miss a trick, or site as it were, Brett will also guide you to the nearby National Wallace Monument punctuating the Abbey Craig, a forested hill overlooking Stirling and its legendary battled bridge depicted in the 1995 epic war film “Braveheart.” In addition to Stirling, you will tour the 13th-century castle Doune (pronounced Dune), which provided the interior and courtyard scenes from House Stark’s stronghold of Winterfell in the first episodes of HBO’s Game of Thrones series. Doune castle was also the main filming location for the 1975 British comedy “Monty Python and the Holy Grail” and was portrayed as the fictional Castle Leoch in the television drama Outlander.

From the bulwarks and bastions of medieval Stirling and Doune, Brett will shuttle the group to Scotland’s northern most city – Inverness – capital of the Highlands, for two nights.


Awake to another epic day on the calendar. After breakfast, you will embark on a unique boat excursion on the uber-scenic Loch Ness to discover the mystery of Nessie, a.k.a. the Loch Ness Monster. From shore, you’ll be able to wander into the Loch to wet your toes and see if you can draw Nessie’s attention. We hear she’s a herbivore so rest assured you will return with all ten toes intact. Post-monster, sitting idyllically at Loch’s edge, you will explore ruined Urquhart castle that played a role in the Wars of Scottish Independence in the 14th century. To crown your day in this splendid Highlands haven, we’ll transport over to the Black Isle pub for some nourishing grub and a local pint (or two) of ale. Amen!


On the fifth day of your journey we’ll wend our way through the picturesque Highlands to the heart of Scotland’s whisky production – Speyside – to take in the angel’s share at the family owned Glenfiddich distillery, Brett’s personal favorite, in the Valley of the Deer. Your two-hour tour will include Glenfiddich’s Mash House, Still House, warehouses 1 & 8, Bottling Hall and the private tasting room where you’ll imbibe 5 prized single malts. If that isn’t enough, (if time allows) Brett will bus you over to two more national treasures, Aberlour and Macallan distilleries. Yowzah! From there, the group will make its way south along the east coast to the town of Carnoustie for an unforgettable night at a cozy spa hotel with swimming pool and Jacuzzi bang on a championship links golf course. Really!


You and golfing enthusiasts alike will be awed by the morning views from the room overlooking the 8-time British Open course. Carnoustie is said to be the toughest of the Open links, especially the last three holes. Case in point, during the 1999 Open, tournament leader Jean van de Velde triple bogeyed the 18th hole when he only needed a double bogey to win. Yikes! We won’t have time to play a round during our stay but the next best thing is your hot breakfast buffet waiting for you in the dining room meters from the 1st tee and 18th green of this revered championship course.

Carnoustie, however, is just the appetizer. Your next stop along the road is the enchanting town of St. Andrews, commonly referred to as the “home of golf” because the sport was first played here in the 15th century. As we wander through town, you will walk along the Old Course; get photographed on its iconic, 700-year-old Swilcan Bridge like all big-time golfers have done before; explore the storied ruins of St. Andrew’s cathedral, home to relics of Andrew the Apostle; and mosey past the University of St. Andrews, Scotland’s first university founded in the year 1413. It was here at this renowned institution eons later, at a school function in the year 2001, that one of its most famous students, a young Prince William, met his bride to-be, Catherine Middleton. Imagine, you send your daughter off to college and she returns home as a member of the British royal family, the future Queen of England.

Concluding our love story, the group will giddy-up through the colorful countryside to stay a pair of nights in the ancient capital of Scotland, Edinburgh, second to London as the most popular tourist destination in the United Kingdom.

In this magical city there are umpteen things to do. You’re gonna love it! First, Brett will guide you to the most important locale, Edinburgh Castle, taking some 3 hours to tour. Afterwards, it’s your time, free to do whatever you please. Brett will make suggestions, point you to other notable sites to consider, such as window-shop the so-called Royal Mile; explore places that inspired J. K. Rowling to pen her blockbuster book series “Harry Potter;” step aboard Her Majesty’s Royal Yacht Britannia; hike Calton Hill for sweeping views over the city; climb even higher to a 2000-year-old extinct volcano locally known as Arthur’s Seat; and/or perhaps take in Edinburgh’s signature event, wowing performances of bagpipes, drums and Royal Marines at the world-renowned Military Tattoo (it’s that time of year). Finish your dreamy day with a dram of your favorite Scotch. You’re an authority now on whisky and all things Scotland. Cheers!

Regrettably, it’s time to say good-bye to the friends we’ve made. Our tour is over, unless you’ve chosen to continue with Brett on the next tour program for more culture and cuisine. (Let Brett know and he will book you on his flight from Edinburgh to Normandy, France for the next tour start.)